What an Ancient Reptile Tells Us About Teeth and Aging

Paleontologists have recently identified a new reptile that they say had advanced teeth and jaws that were remarkably similar to mammalian jaws, even though it is 80 million years older than our oldest mammalian ancestors. Like humans, it couldn’t regrow teeth when they were lost, and its teeth and jaws had to adapt to the problem.

A Primitive Reptile with a Hard-Knock Life

Researchers recently described the species Opisthodontosaurus carrolli, which in some ways is so primitive that it was initially confused with amphibians that shared its environment. The lizard had a large, flat head. It crawled along the ground and into the water where it fed on hard-shelled arthropods, probably crabs, but also possibly large insects which were, in the words of researchers, “tougher than those normally subdued by simple piercing dentition.” 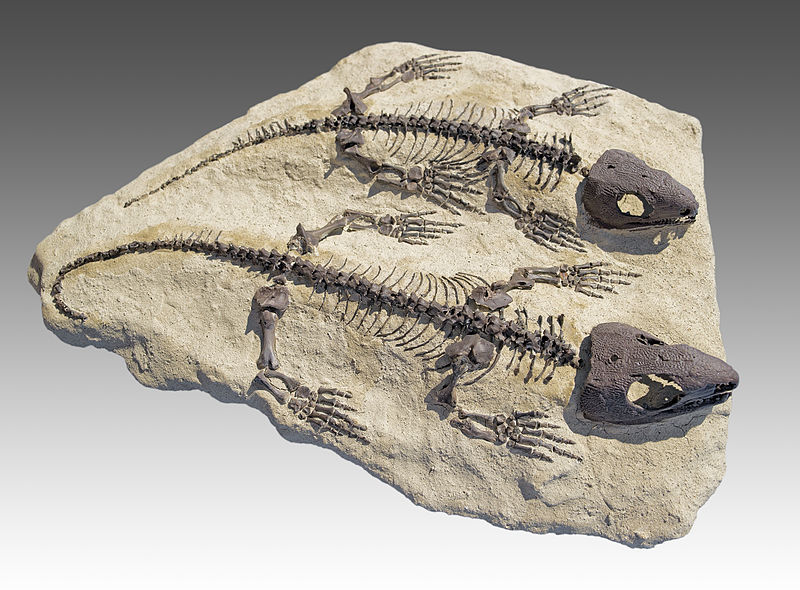 By Didier Descouens (Own work)

While most lizards have these simple piercing teeth to stab beetles and other insects, what Opisthodontosaurus ate had to be crunched, hard, to kill. To accomplish this job of killing these arthropods, the lizard had a very muscular jaw, complete with large muscle attachments similar to a mammal’s jaw.

It also had very strong teeth. These teeth had to be firmly anchored in the jaw, and couldn’t just be shed and replaced the way that crocodiles and sharks do. But despite the strength of the teeth, some of them were lost with age due to the toughness of the lizard’s prey.

Under constant stress, the teeth and jaws had to remain in balance, so the reptile didn’t really want to have gaps in its teeth. So it came up with a different way of keeping its jaws full: its teeth kept growing. Not like rodent teeth, which grow longer and longer, these teeth kept growing outward, getting wider and wider.

If Your Teeth Don’t Grow…

So what does this tell us about our jaws? Like Opisthodontosaurus, humans lose teeth as we get older. But unlike this ancient reptile, we don’t have the ability for our teeth to keep growing. So, how do humans keep our jaws and our teeth in harmony as we age? Our jaws shrink.

This effect is responsible for much of the effect of aging on our face, because it makes our skin, which used to stretch taut over our face, seem large and excess, as it begins to sag, wrinkle, and fold.

But that’s what New You Dentures are designed to reverse. A denture that is designed to replace not just your teeth, but lost jawbone as well to restore your face to its youthful, healthy appearance.

Although there’s no danger anyone will mistake us for Opisthodontosaurus, none of us wants to look like an “old reptile.” To learn more about how New You Dentures can help you avoid that, please call for an appointment with a River Edge neuromuscular dentist at the River Edge Dental Center for TMJ, Sleep Apnea, & Reconstructive Dentistry.

Do you want to improve your smile?